Today was a tough Monday.  I have a lot to do at work, and 2 fewer days to get it done in – I’m taking vacation this week to visit family in Utah.   Knowing I had a lot to do, I went to bed early on Sunday evening.  And I never would have expected the Monday that I had. 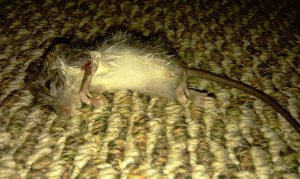 First,  the cats were up very early this morning.  They were running around, chasing something.  I wanted to sleep so I put my eye pillow on and ear plugs in my ears….  and when I woke up at 7am, this is what I almost killed myeslf to NOT smash into the carpet.  Yes, you see correctly, a dead mouse. Apparently its been licked clean and was delivered at the foot of my bed with pride.

It’s obvious it was  a great gift if soley based on the efforts of the two furry creatures that brought such a treasure to me.  The cats were exhausted from all their efforts.. here they are, sleeping. They did not stir once while I was getting ready for work.  Not at all.  They usually get up, get a bite to eat, then like to say good-bye to me.  Nope, not this morning.  It was as if they were saying “take your present, now keep it down”.

I went off to work without so much as a kiss, a lick, a look.  😦   Work was work, I’m learing a lot.  Its starting too feel not so overwhelming.  But like I’ve stated numerous times, there is a lot of work.  I end up working a bit late and eating a bag of chips for dinner.  I got home, fed the cats, got into my jammies, and started working again.

Its been about 30 minutes, and the cats have just come into the house with another ‘prize’.  Alive.  They are/were chasing it around the house…  the poor thing has hidden itself somewhere safely and they are stalking it…. waiting for it to feel safe enough to come out, then WHAM!  In addition to this nonsense, the spiders are coming out (Spring/Summer in CA). To your left is what I found in the hallway, on my way to bed.  Yes, that is a QUARTER under the spider.  The thing is enormous.  I do not believe in killing anything, so the damn thing is still in the hall.  I’ve closed the bedroom door…. fingers crossed that it stays where it is now and doesn’t travel any closer to me…

So with a day like today, I’m going to hit the sack, and wish for a better, less active, furry day.  I need to get a good nights sleep – I have a LOT of work to do/finish up tomorrow!!